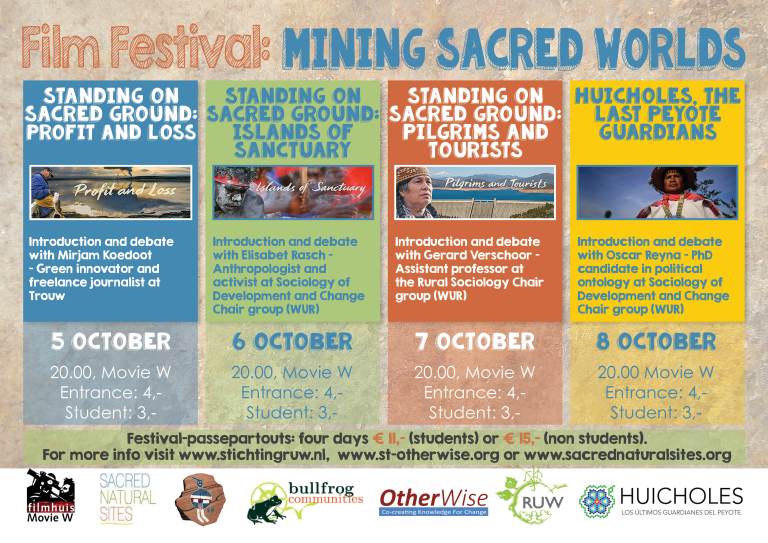 ‘Mining Sacred Worlds’ is a four-day film festival -with dialogues from guest speakers- which evolves around the mining boom currently threatening the environment, people and communities around the world. It highlights the impacts on indigenous peoples’ sacred places and their ways of living, seeing and caring for the world we all inhabit today.

The festival starts with three premiere screenings for the Netherlands from the series Standing on Sacred Ground :

6 October “Islands of Sanctuary” which follows indigenous Australians in their fight against the mining industry and native Hawaiians recuperating a disused bombing range on of their sacred islands.

7 October “Pilgrims and Tourists” shows the local resistance to a pipeline being built through the Russian Altai into China and the struggle of the Californian Winemem Wintu against a hydro power dam being imposed on their traditional lands, flooding sacred sites.

The festival closes on 8 October with “Huicholes the last Peyote Guardians” showing the struggle for conservation of a sacred land in the face of gold and silver mining in Mexico.

As a response to the clashing worldviews shown in the films, a thematic debate with activists, journalists and scholars, conducting research on site, will engage the audience in discussion each evening.

Mining Scared Worlds is brought to you by OtherWise, RUW Foundation, Sociology of Development and Change (WUR) and the Sacred Natural Sites Initiative.

Starting Time: 20.00, but tickets can be purhased from 19.30 at location.
Location: Movie W Film Theatre, Wageningen

5th  October: Profit and Loss. Christopher McLeod, 2013. 57 min.
Synopsis. ‘Profit and Loss’ tells the stories of two indigenous groups and their resistance to the modern gold rush – our insatiable thirst for mineral resources that threatens their lands. In Papua New Guinea, villagers resist forced relocation by a nickel mine and try to stop its plan to dump mining waste into the sea. In Canada, First Nations people protest the destruction of traditional hunting and fishing grounds by the tar sands industry, which brings jobs, but also may be causing cancer. Rare verity scenes of tribal life allow indigenous people to tell their own stories – and confront us with the ethical consequences of our culture of consumption.  Narrated by Graham Greene, this film is part of the ‘Standing on Sacred Ground’ documentary series.

6th October: Islands of Sanctuary. Christopher McLeod, 2013. 57 min.
Native Hawaiians and Aboriginal Australians resist threats to their sacred places in a growing international movement to defend human rights and protect the environment. In Australia’s Northern Territory, Aboriginal clans maintain Indigenous Protected Areas and resist the destructive effects of a mining boom. In Hawai`i, indigenous ecological and spiritual practices are used to restore the sacred island of Kaho`olawe after 50 years of military use as a bombing range.

8th October: Huicholes, The Last Peyote Guardians. Hernan Vilchez, 2014. 120 min.
Synopsis. The film tells the story of the mystical Wixarika People also known as the Huicholes, one of the last living pre-Hispanic cultures in Latin America. Their sacred ancestral territory known as Wirikuta is home to the famous peyote cactus that has guided and inspired generations of Wixarika. Today the Wixarika struggle against the Mexican government and multinational mining corporations that are encroaching on their homelands. Their activities are threatening the delicate culture and biodiversity of this unique landscape that is recognised as a UNESCO World Cultural and Natural Heritage. An unequal and controversial fight triggers the global debate between ancient cultural values, the exploitation of nature and the inevitable process of change and development.