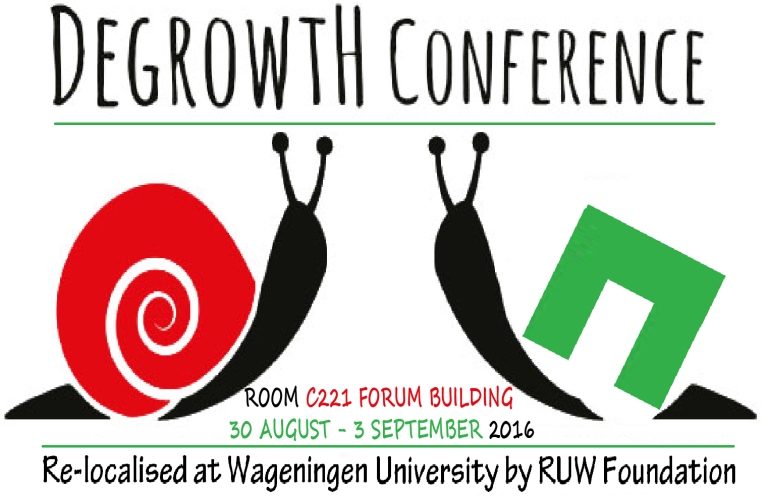 A new economic paradigm called Degrowth is emerging. Through more sharing, more free time, less stuff and new forms of collaborating we can all live an enjoyable and meaningful life within planetary boundaries. RUW Foundation has relocalised the Budapest Degrowth conference in Wageningen. These are were the highlights for us:

First off: This was a marathon event to organise. 5 days with a morning, afternoon and evening session required a high level of dedication and time. The  attendance of the event was not great due to the timing of the event just before the academic year started. Very few people were at the campus and even fewer were interested in joining one of the many sessions. Whilst being an emerging academic paradigm in sustainability sciences the Degrowth school of thought is still relatively unknown.

The sessions were of high quality and many interesting guest speakers shared their views and research with the audience. Remarkable was the diversity of perspectives and backgrounds of the panellists in most of the sessions. Policy makers, feminists, academics, activists, economists and politicians all were given a voice at many of the panel sessions.

Interesting was the global focus of the conference: periphery and semi-periphery countries, Bhutan, India and Latin America were represented and talked about in great detail at the event.

In the introduction lecture the aim was stated to re-politicise sustainability. As everyone today is in favour of sustainability, it is increasingly becoming an empty term. At RUW foundation we seek the debate on issues related to sustainability and welcome this approach to diversify the sustainability debate.

The hypotheses that in order to achieve sustainability involves doing less, not more and that infinite growth on a finite planet are impossible formed the starting point for many explorations and keynote lectures. There appears to be a growing consensus on the problems we face such as climate change, ecocide, overpopulation and extreme inequality between race, sex, nationality and generations. On the solutions to these problems there is less consensus and many guest speakers spoke about solutions that are considered undesirable. This included geo-engineering, technofixes, rigged emission trading schemes, replacing cars with electric cars, sustainable growth, eco-modernisation, offsetting emissions, fracking, GMO’s, quantitative easing, large hydro dams and clean coal. The overall message was that we need localised solutions so it doesn’t make much sense to talk about generally applicable solutions and that we need system change in order to make existing practices such as permaculture, local food, alternative currencies and the sharing economy more viable.

A good overview of the current state of Degrowth and the immense potential of this narrative was presented by Clive Spash in his keynote lecture. He does not only talk about the benefits and necessity of a shrinking global economy but doesn’t shy away to challenge the notion of grassroot change. A degrowth system could be very tyrannical and top-down if we let it. Like every ideology it can become dangerous once it becomes dogmatic and fundamentalist.

In India the economic situation is different from what we in the west have grown accustomed to. The increase in economic activity does still need to an increase in health, happiness and well-being. In his keynote Ashish Kothari distinguishes different types of economic activity and talks about the neo-colonial aspects of the current development path India aspires. The immensity of this modernist operation is countered by the spiritual and religious aspects that are a key aspect of Indian life. The greatest accomplishment of this talk is making this tension understandable for outsiders with little knowledge on indian culture and widening the scope of degrowth to include one of the world’s largest nations.